Fog computing has been a topic around for several years. Since the cloud computing is a centralized infrastructure, it is usually deployed at a fixed place. Thus, cloud computing lacks the ability to deal latency-critical and bandwidth-intensive scenarios taking its inflexible deployment into account. As the 5G is approaching, IoT devices are expected to explode. Those devices will be more mobile than they are now, and delivering time-critical information will be problems. Some such information may be handled in an infrastructure nearby to meet the latency requirement, yet this kind of information may not be hard to dealt with due to its smaller size. Cloud machines will not necessarily get involved. Some nearby computing resources could be utilized. This brings the question: how to organize the resources?

In this paper, the authors propose a new method, called Hierarchical and Autonomous Fog Architecture (HAFA) to organize heterogeneous fog nodes into a multi-layered connected hierarchy. It is based on:

several parameters such as physical location, distance from IoT devices and/or users, node resource configuration, privacy and security. Fog nodes are grouped to facilitate resource pooling and local control, and groups of fog nodes are linked to facilitate disaster readiness and autonomy.

First, the authors group nodes into several categories based on the factors of locality, mobility and capability of resources. . In a case of smart city, the resources are grouped into:

Second, these groups of nodes are organized into logically connected multi-layer hierarchy based on several parameters, such as location, distance, resource configuration, privacy and security, referring to Table 1. In this paper, the simulation nodes are organized based on location. 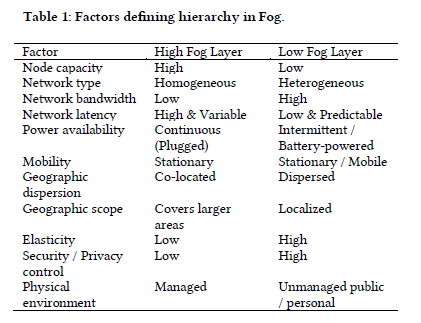 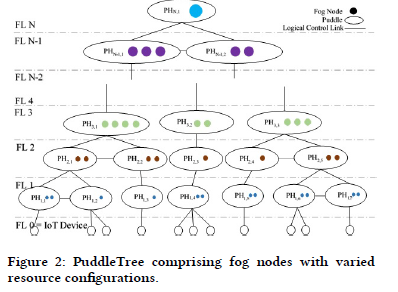 Each Puddle is logically connected only to a single Puddle in the vicinity belonging to immediately next higher layer and one or more Puddles in same and immediately next lower layer. Upon need, we can traverse up / down the hierarchy and find the Puddle that has nodes of sufficient resources to serve the given service request.

Intra-layer connections are leveraged to share information among PuddleHeads belonging to same layer regarding workload and resource availability, and can be primarily used for load sharing during workload overflow by lateral handoff of services to Puddles in neighborhood, failover during disaster scenarios, as well as for exchange of information regarding impending migration of services due to mobility of users / IoT devices, expected loss of fog nodes in current Puddle due to energy depletion, addition of new nodes in a neighboring Puddle resulting in a large amount of available resources, etc.

The tree-like structure is also easy to traverse to extract information.

Compared with other algorithms, such as K-Means and Divisive algorithms, Agglomerative Complete Linkage Hierarchical Clustering (ACLHC) gives the best results in this scenario.  K-Means requires specific number of cluster to be formed, which is not feasible or doable with this environment. Divisive clustering method cluster nodes from the top to bottom, while a bottom-up approach, ACLHC, fits this environment.

With the proposed approach and the results of experiments in this paper, the authors claim that their fog architecture, HAFA, is more scalable and more optimal comparing other approaches. Table 2 shows the comparison. 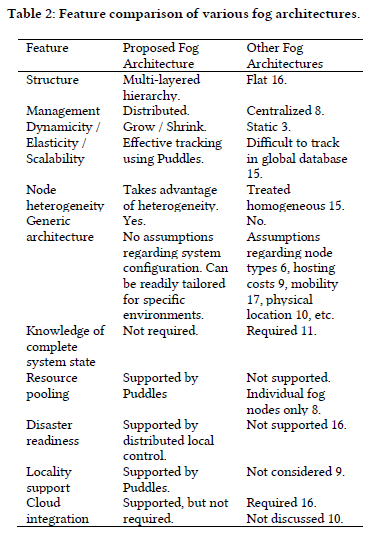